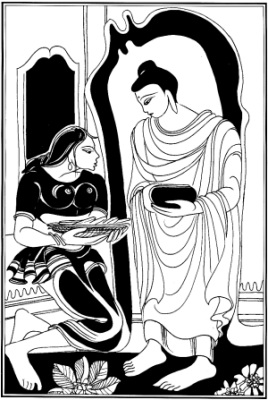 THERE IS NONE WHO IS BLAMELESS

NO ONE IS ALWAYS BLAMED OR PRAISED

THE BLAMELESS ARE PRAISED. WHO DARE BLAME THE PURE?

There never has been, there never will be, nor is there now, anyone who is always blamed or always praised. [228]

If the wise praise him day after day, knowing him to be truly faultless, wise and endowed with knowledge and virtue, who would blame him, who is like a piece of refined gold? Even the gods praise him; he is praised even by the great Brahma. [229-230]

XVII: 07 Nothing too much and too little (Atula)

Once Atula and his companions wanted to listen to the Dhamma. They went to see Venerable Revata, but he was very aloof and he did not say anything to them. They were very disappointed and went to Venerable Sariputta. When he learned why they had come, Sariputta expounded very deep Dhamma to them. His preaching also was not to their liking, and they grumbled that Sariputta had been too lengthy and too profound. Next Atula and his party approached Venerable Ananda, who expounded to them the bare essentials of the Dhamma. This time they remarked that Ananda had been too brief and too sketchy. Finally they came to the Buddha and said to him, 'Venerable Sir, we have come to listen to your teaching. We have been to other preachers before we came here, but we are not satisfied with any of them. Venerable Revata did not bother to teach us and he kept silent; Venerable Sariputta was too exhaustive and the Dhamma he taught us was too difficult for us. As for Venerable Ananda, he was too brief and too sketchy. We did not like any of their discourses.'

To them the Buddha said, 'My disciples, blaming others is not something new. There is no one in this world who is never blamed; people would blame even a king, or even a Buddha. To be blamed or to be praised by a narrowminded one is of no consequence. One is truly criticised only when he is censured by a wise man, and truly praised when commended by a wise man.'