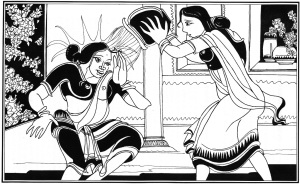 BE TRUTHFUL, PATIENT AND GENEROUS

One should utter the truth. One should not be angry. One should give even from a scanty store to him who asks. Along these three paths one may go to the presence of the gods. [224]

On his return from the deva world, Moggallana asked the Buddha whether it was possible to gain such great benefits by just speaking the truth, or by restraining one's anger or by giving small amounts of such trifling things. The Buddha then answered, 'Have you not seen for yourself and heard what the devas said? You should not have any doubt. Even little deeds of merit surely leads one to the world of the devas.'