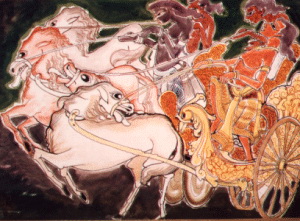 He who holds back arisen anger as one checks a whirling chariot, him I call a charioteer; other folk only hold the reins. [222]

XVII: 02 A monk and the tree spirit

Once a bhikkhu from Alavi wanted to build a hut for himself. So he started to cut down a tree, but the deva who was dwelling in that tree with her infant son urged him not to cut it down. The bhikkhu ignored her. Failing to stop him she put her son on a branch, hoping that this would stop him from cutting the tree. By then, he was already swinging his axe and he could not stop it in time and unintentionally cut off the arm of the child. Seeing her child being harmed in this way, the mother flew into a rage and was about to kill the bhikkhu. As she raised her hands to strike him, she suddenly checked herself and reflected: 'If I were to kill a bhikkhu, I would be killing one who is observing precepts (sila); in that case, I would surely suffer. This might set an example for other bhikkhus to be killed also. But this bhikkhu has a Master. I must go and see his Master.' So she went weeping to the Buddha and related all that had happened.

The Buddha said to her 'O devata! You have done well to control yourself'. He then expounded the Dhamma to her.

Reflecting mindfully on the admonition, the deva realised the Dhamma, and for her dwelling place, she was offered a tree near the Jetavana monastery. After this incident, the Buddha advised the bhikkhus to avoid destroying plant life.