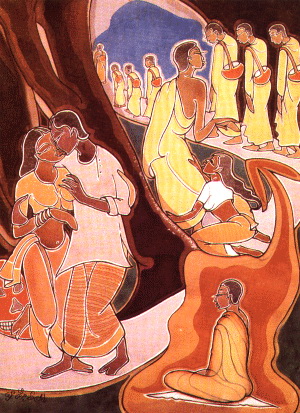 Anitthi Gandha Kumara lived in Savatthi. He was to marry a beautiful young girl from the city of Sagala. As the bride was coming from her home to Savatthi, she became ill and died on the way. When the bridegroom learned of the tragic death of his bride, he was overwhelmed with grief and pain.

At this juncture, the Buddha went to his house knowing that the time was ripe for the young man to realise the Dhamma. The parents of the young man offered almsfood to the Buddha. After the meal, the Buddha sent for the young man and asked him why he was in such pain and distress. He related the whole story of the tragic death of his young bride. Then the Enlightened One said to him, 'Lust begets sorrow; it is due to lust for things and lust for sensual pleasures that sorrow and fear arise.' On reflecting upon the advice of the Buddha, he overcame his grief and pain and realised the fleeting nature of sensual desires.