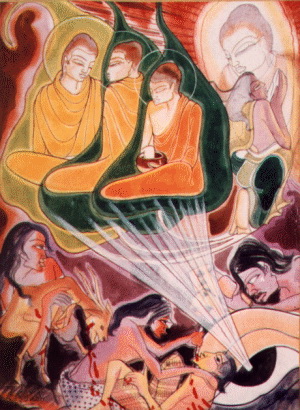 BLESSED IS THE SIGHT OF THE NOBLE

SORROWFUL IS ASSOCIATION WITH THE FOOLISH

Therefore, with the intelligent, the wise,1 the learned, 2 the enduring, 3the dutiful 4and the Ariya 5 — with a man of such virtue and intellect should one associate, as the moon (follows) the starry path. [208]

About ten months before his attainment of parinibbana, the Buddha spent the vassa at Beluva village near Vesali. While he was staying there, he suffered from dysentery. When Sakka learned that he was sick, Sakka went personally to nurse him. The Buddha told him not to worry about his health as there were many bhikkhus near him; but Sakka insisted on nursing the Enlightened One until he recovered.

The bhikkhus were surprised and awe-struck to find Sakka himself attending to the Buddha. When he heard their remarks the Buddha said, 'Bhikkhus! There is nothing surprising about Sakka's love and devotion to me. Before his passing away Sakka once had the opportunity of listening to the Dhamma expounded by me and he realised the Dhamma. After his passing away, he was born as the present Sakka. All these happened to him simply because he had listened to the Dhamma. Indeed, bhikkhus, it is good to see the Noble Ones; it is a pleasure to live with them.'