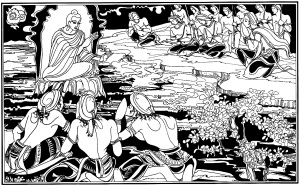 Indeed we live very happily, without any impediments.1 Like the Abhassara Brahmas we shall live on delightful satisfaction (piti) as our food. [200]

XV: 02 Mara influences the villagers against the Buddha

On one occasion, the Buddha saw in his vision that a large group of maidens from Pancasala village were due to attain the first stage of Sainthood. So he went to stay near that village. One day, after their bath at the riverside, the maidens returned to their village. About the same time, the Buddha entered the village for almsfood but due to the evil influence of Mara none of the villagers offered him almsfood.

On his return the Buddha met Mara, who promptly asked whether he had received enough almsfood. He knew that Mara had influenced the villagers not to offer any almsfood to him. So the Buddha said, 'You evil one! It was foolish of you to commit such a misdeed.' Mara did not say anything, but he thought that it would be fun to entice him back to the village and get the villagers to insult the Buddha by making fun of him. 'You must be hungry. Return to the village, you will be offered almsfood,' said Mara.

Just then, the village maidens arrived on the scene and paid homage to the Buddha. In their presence, Mara taunted him, 'O Gotama, since you were not offered almsfood this morning, you must be feeling the pangs of hunger!' The Buddha replied, 'O Mara, even though we don't get any food, we shall live on the delightful satisfaction and bliss of the Dhamma, like the Abhassara Brahmas who live only on delightful satisfaction (piti) and bliss (sukha) of jhana.'