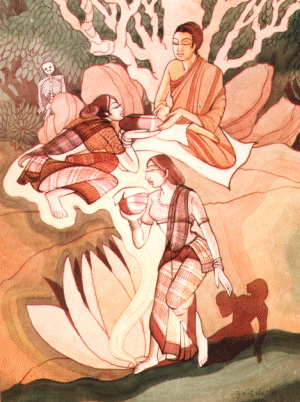 HONOUR TO WHOM HONOUR IS DUE

He who reverences those worthy of reverence, whether Buddhas or their disciples; those who have overcome the impediments 1 and have got rid of grief and lamentation, — the merit of him who reverences such peaceful 2 and fearless ones 3 cannot be measured by anyone as such and such. [195-196]

XIV: 09 Honour those worthy of honour

On one occasion, while the Buddha and his followers were on a journey to Benares they came to a field where there was a spirit shrine. Not far from the shrine, a brahmin was ploughing the field. Seeing the brahmin, the Enlightened One sent for him. When he arrived, the brahmin paid respects to the shrine but not to him. The Buddha said, 'Brahmin, in respecting the shrine you have done well.' That made the brahmin happy. After thus putting him in a favourable frame of mind, the Buddha, by his supernormal power, brought forth the golden stupa of Kassapa Buddha and let it remain visible in the sky. He then explained to the brahmin and the other bhikkhus that there were four classes of persons worthy of a stupa. They are the Buddhas, the Paccekabuddhas, the Ariya disciples, and the Universal Monarchs. He also told them about the three types of stupas erected in honour of them. The stupas where corporeal relics are enshrined are known as Sarira Dhatu cetiya; the stupas and figures made in the likeness of the above four personages are known as Uddissa cetiya; and the stupa where personal effects like robes, bowls etc. of those revered personages are enshrined are known as Paribhoga cetiya. The Bodhi tree is also included in the Paribhoga cetiya. The Buddha then stressed the importance of paying homage to those who are worthy of veneration.

At the end of the discourse the brahmin attained the first stage of Sainthood. The stupa of Kassapa Buddha remained visible for seven more days, and people kept on coming to the stupa to pay their homage. At the end of seven days, the stupa disappeared. It was replaced with a big stone stupa.