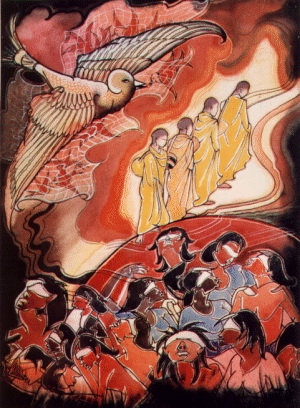 THERE IS NO EVIL THAT A LIAR CANNOT COMMIT

There is no evil that cannot be done by the liar, who has transgressed the one law (of truthfulness) and who is indifferent to a world beyond. [176]

As the Buddha went on expounding the Dhamma, more and more people came flocking to him, and the ascetics of other faiths found their following to be dwindling. So they decided to ruin the reputation of the Buddha. They instigated Cinca Manavika, a beautiful pupil of theirs, and told her, 'If you have our interests at heart, please help us and put the Buddha to shame.' She agreed to their plot.

That same evening, she took some flowers and went in the direction of the Jetavana monastery. When people asked her where she was going, she replied, 'What is the use of you knowing where I am going?' Then she would go to the place of the other ascetics near the Jetavana monastery and would come back early in the morning to make it appear as if she had spent the night at the Jetavana monastery. When asked, she would reply, 'I spent the night with the Buddha at the monastery.' After three or four months had passed, she wrapped some cloth around her stomach to make herself look pregnant. Then, after nine months, she created the impression of a woman in an advanced stage of pregnancy and she went to the monastery to confront the Buddha.

The Buddha was then expounding the Dhamma to a congregation of bhikkhus and laymen. Seeing him preaching she accused him, 'O you big Samana! You are clever to preach to others. I am now pregnant by you, yet you do nothing for my confinement. You only know how to enjoy yourself!' The Buddha stopped preaching for a while and said to her, 'Sister, only you and I know whether you are speaking the truth or not,' and she replied, 'Yes, you are right, how can others know what only you and I have done?'

At that instant, Sakka, king of the devas became aware of the trouble taking place at the Jetavana monastery. So he sent four of his devas in the form of young rats, who got under her clothes and bit off the strings that held the cloth around her belly. Thus, her deception was uncovered, and many from the crowd reprimanded her, 'O you wicked woman! Liar and cheat! How dare you accuse our noble Teacher!' Fearing for her safety, she ran from the monastery as fast as she could. However after some distance she met with an unfortunate accident and had to face a miserable and untimely death.

The next day, while the bhikkhus were talking about Cinca Manavika, the Buddha told them 'Bhikkhus, one who is not afraid to tell lies, and who does not care what happens in the future existences, will not hesitate to do any evil.'

The Buddha then revealed that Cinca Manavika in one of her past existences was born as the chief consort to a King. She fell in love with the King's son but the Prince did not reciprocate her love. So she conceived an evil plan to harm him. She disfigured her body with her own hands. Then she went to the King and falsely accused that his son had done this to her when she refused his advances.

Without investigating, the King banished him from his kingdom. When the King came to know of the true situation, she was duly punished for her evil deeds.