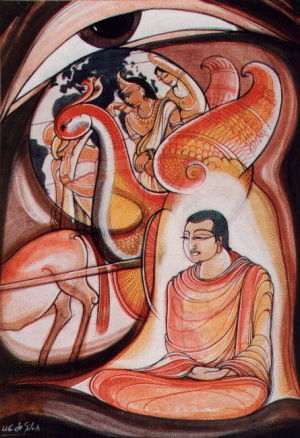 THE WISE ARE NOT ATTACHED TO THE WORLD

Come, behold this world 1 which is like unto an ornamented royal chariot, wherein fools flounder, but for the wise there is no attachment. [171]

XIII: 04 How the Buddha consoled a sad prince (Abhaya)

On one occasion, Prince Abhaya triumphantly returned after suppressing a rebellion at the frontier. King Bimbisara was so pleased with him that for seven days, Abhaya was given the glory and honour of a ruler, together with a dancing girl to entertain him. On the last day, while the dancer was entertaining the prince and his company in the garden, she had a severe stroke. She collapsed and died on the spot. The prince was shocked and very much distressed. Sorrowfully, he went for solace to the Buddha who said, 'O prince, the tears you have shed all through the round of rebirths cannot be measured. This world of component things* is the place where fools flounder.'