Chapter XII - ATTA VAGGA - The Self 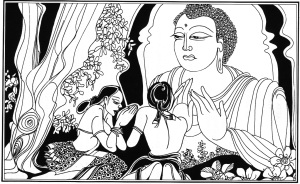 If one holds oneself dear, one should protect oneself well. During every one of the three watches (of life) the wise man should keep vigil (against evil). [157]

XII: 01 The prince who had no offspring (Bodhiraja Kumara)

Once, there was a prince called Bodhi who had built a magnificent palace. When the palace was completed he invited the Buddha for blessing and offering of almsfood. For this special occasion, he perfumed the palace with scents and incense. As the prince had no children, he spread out a long piece of cloth on the floor of the dining hall and made a solemn wish that if ever his wife was to be blessed with children, the Buddha would step on the cloth. When the Buddha came, Prince Bodhi respectfully requested him to enter the hall. But instead of moving, he only looked at Ananda who understood him and asked Prince Bodhi to have the cloth removed. Only then did the Buddha enter the palace. The prince then offered the food to the Enlightened One. After the meal, the prince asked why he had not stepped on the cloth. The Buddha in turn asked the prince whether he had not spread the cloth making a solemn wish that if he were to be blessed with a child, the Enlightened One would step on it; and the prince replied in the affirmative. The Buddha then explained that he and his wife would not be able to have any children because of their past bad deeds and related what they had done.

In one of their past existences, the prince and his wife were the sole survivors of a shipwreck. They were stranded on a deserted island, and there they lived by eating birds' eggs, fledglings and birds without any feeling of remorse at any time. They were so concerned about their own survival that they selfishly destroyed not only the lives of innocent birds, but those of their young as well. For those evil deeds, they would not be able to have any children. If they had felt even a slight remorse for their deeds at any stage of their lives, they could have had children in this existence.