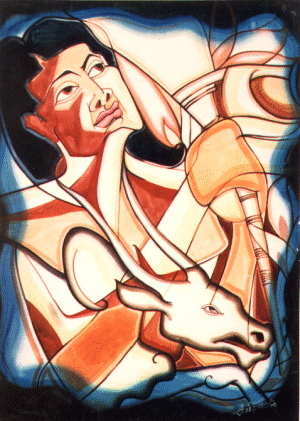 ONE WITH LITTLE LEARNING LACKS WISDOM

The man of little learning grows old like the ox. His muscles grow; his wisdom grows not. [152]

XI:07 The monk who always said the wrong thing (Laludayi)

Bhikkhu Laludayi was dim-witted and very tactless. He could never say things which were appropriate to the occasion, although he tried hard. Thus, on joyful and auspicious occasions he would talk about sorrow, and on sorrowful occasions he would talk about joy and happiness. On top of that he never realised that he had been saying things which were inappropriate to the occasions. When told about this, the Buddha said, 'One like Laludayi who has little knowledge is just like an ox. His muscles grow but his wisdom does not.'

The Buddha then revealed that Laludayi in one of his past existences had been a farmer. He had two oxen to help him to till the land. When one of the oxen died, he was very sad and depressed. He urged his son to request for an ox from the king. His son refused, but instead asked him to go personally to ask the favour from the king.

Luckily, the king was a wise ruler. He knew that the farmer by the slip of tongue had said the exact opposite of what he had intended to say. The king presented him not one but sixteen oxen.