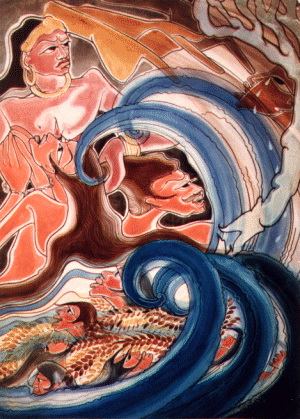 Not wandering naked, 1nor matted locks, 2 nor filth,3 nor fasting,4 nor lying on the ground,5 nor dust,6 nor ashes,7nor striving to squat on the heels,8 can purify a mortal who has not overcome doubts.9 [141]

X:08 The monk with many possessions (Bahu Bhandika)

Once there was a rich man in Savatthi. After the death of his wife, he decided to become a bhikkhu. But before he joined the Order, he built a monastery, which included a kitchen and a store room. He also brought his own furniture, utensils and a large stock of rice, oil, butter and other provisions. Whatever dishes he wanted were cooked for him by his servants. Thus, even as a bhikkhu he was living in comfort. One day, other bhikkhus reported to the Buddha how he was still leading the luxurious life of a rich man. So, the Buddha told Bahu Bhandika, 'My son, I have been teaching all of you to live a simple life; why have you brought so much property with you?' When he heard the Buddha speaking in that manner, the bhikkhu lost his temper and said angrily, 'Indeed, Venerable Sir! I will now live as you wish me to.' So saying, he cast off his robe and asked, 'Is this the way that you advise me to live?'

Seeing him thus, the Buddha admonished him, 'My son, in your last existence you were an evil spirit; even as a spirit you had a sense of shame (hiri) and a sense of fear (ottappa) to do evil. Now that you are a bhikkhu, why do you have to lose your sense of shame and the sense of fear to behave like this?' When the bhikkhu heard those words, he realised his mistake, his sense of shame and fear returned, he admitted his mistakes and respectfully sought forgiveness from the Buddha. The Enlightened One then admonished him, 'Standing there without your upper robe is not proper. Just discarding your robe, etc., does not make you an austere bhikkhu. A bhikkhu must also discard his ignorance.'

At the end of the discourse, many bhikkhus, reflecting mindfully on the admonition given to Bahu Bhandika, attained the first stage of Sainthood.