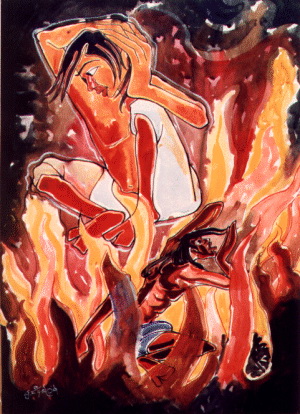 NO ESCAPE FROM EVIL

So, when a fool does wrong deeds, he does not realize (their evil nature); by his own deeds the fool is tormented, like one burnt by fire. [136]

Once, as Venerable Moggollana was coming down a hill with Venerable Lakkhana, he saw a spirit (peta) in the form of a large snake and smiled to indicate to others that he had noticed this strange creature. When they were back at the Jetavana monastery, in the presence of the Buddha, Moggollana told Lakkhana about the snake, with its long body burning in flames. The Buddha said he himself had also seen that very peta soon after his Enlightenment. The Enlightened One then revealed that a very long time ago, that particular peta was a thief during the time of Kassapa Buddha. As a thief and cruel-hearted man, he had set fire to the house of a rich man several times. And not satisfied with that, he had also set fire to the monastery donated by the same rich man to Kassapa Buddha, while he was out on an almsround. As a result of those evil deeds he had to suffer for a long time. The Buddha then remarked, 'Bhikkhus! Fools when doing evil deeds don't know them as being evil but they cannot escape the evil consequences.'