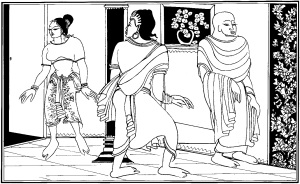 LIFE IS DEAR TO ALL

All tremble at the rod (punishment). Life is dear to all. Comparing others with oneself, one should neither strike nor cause to strike. [130]

After having exchanged blows over the incident at the Jetavana monastery, the same two groups of bhikkhus quarrelled again over the same building. As the rule relating to physically hurting others had already been laid down by the Buddha, this particular rule was strictly observed by both groups.