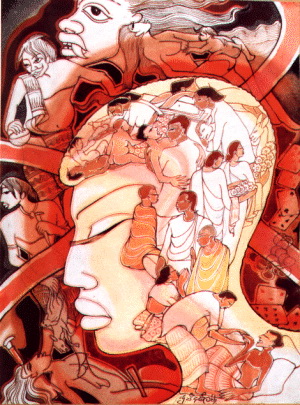 BY ITS EFFECTS EVIL IS KNOWN

BY ITS EFFECTS GOOD IS KNOWN

Even a good person may still meet with suffering so long as his good deed does not bear fruit; but when it does bear fruit he will reap the benefits of his good deed. 2 [120]

Anatha Pindika was the donor of the Jetavana monastery. He was not only generous but also truly devoted to the Buddha. He would go to the Jetavana monastery and pay homage to the Enlightened One thrice daily. In the mornings he would bring along rice gruel, in the daytime some suitable food, and in the evenings some medicine and flowers. After some time Anatha Pindika became poor, but because of his confidence in the Dhamma he was not shaken by poverty, and continued to do his daily acts of charity. One night, a guardian spirit residing in his house appeared before him in person, and said, 'I am the guardian spirit. You have been offering your property to the Buddha with no thought for your future. That is why you are a poor man today. Therefore, you should make no more offering to him and should look after your own business affairs and get rich again.'

When the guardian spirit told Anatha Pindika what he had done for him, permission was granted for the spirit to reside in his house. Then Anatha Pindika took him to the Buddha. To both of them the Buddha said, 'One may not enjoy the benefits of a good deed, or suffer the consequences of a bad deed for a long time, but the time will surely come when good or bad deeds will bear fruit and ripen.'