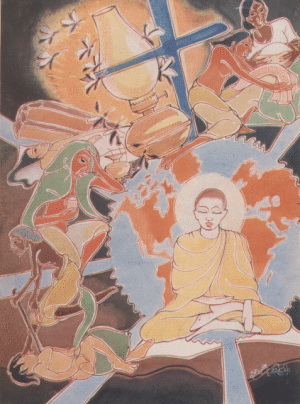 DELIGHTFUL ARE THE FORESTS TO THE PASSIONLESS

Delightful are the forests where worldlings delight not; the passionless1 will rejoice (therein), (for) they seek no sensual pleasures. [99]

VII:10 A courtesan tempts a monk

A bhikkhu, after taking a subject of meditation from the Buddha, was practising meditation in an old garden. A woman of doubtful character came into the garden and there she saw the monk sitting cross-legged. Looking this way and that, and seeing no one else about, she said to herself, 'Here is a man; I will throw his thoughts into confusion.' So standing in front of the monk, she took down her undergarment several times and put it on again, unloosened her hair and bound it up again, and clapped her hands and laughed. The monk became excited; his whole body, in fact, was suffused with excitement. 'What does this mean?' thought he.

The Buddha considered within himself, 'A monk obtained a Subject of Meditation from me and went forth to perform his meditations. How is he getting on?' Seeing that woman, and observing her evil conduct, and perceiving that her evil conduct was upsetting the monk, still remaining seated in his monastery, he spoke as follows, 'Monk, there is no delight where those abide who seek after their lusts. But where those abide who are free from passion, that place is full of delight.' So saying, he sent forth a radiant image of himself, and instructed the monk in the Dhamma. The monk attained Sainthood.