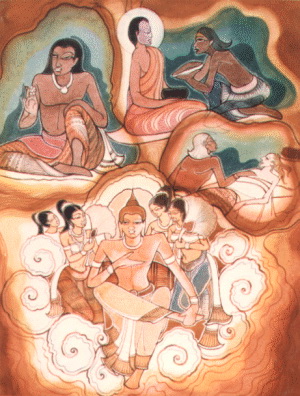 THE WISE ARE NEITHER ELATED NOR DEPRESSED

The good give up (attachment for) everything 1; the saintly prattle not with sensual craving: whether affected by happiness or by pain, the wise show neither elation nor depression.

VI:08 The wise are unaffected by gain or loss

The Buddha once observed the vassa at Veranja with many other bhikkhus at the request of a brahmin. When they were at Veranja, the brahmin while under the evil influence of Mara failed to look after them. The people of Veranja, who were then facing a famine, could offer very little to the bhikkhus when they went on their rounds for almsfood. Venerable Maha Moggallana requested permission from the Buddha to bring some food from a place others cannot reach by using his miraculous power but was refused permission. In spite of all these hardships, the bhikkhus were not disheartened. They were quite contented with the small amount of grain which the horse-traders offered them daily.

At the end of the vassa, after informing the brahmin from Veranja, the Buddha returned to the Jetavana monastery with the other bhikkhus. The people of Savatthi welcomed them back with joy and offered almsfood to the Buddha and his bhikkhus.

Now at that time, by the kindness of the bhikkhus, a group of people were allowed to stay in the monastery. After eating greedily whatever was left over by the bhikkhus, they would go to sleep. On waking up, they would go to the bank of the river to enjoy themselves by shouting, jumping, wrestling or playing. Both within and without the monastery, they did nothing but misbehave.

One day, the bhikkhus were discussing the unruly behavior of those people. They said, 'When there was a famine in Veranja, they were quite decent and well-behaved. Now that they have enough good food they are misbehaving themselves.'