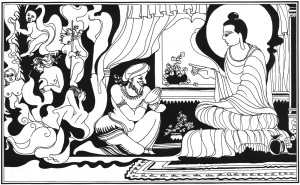 WISE IS HE WHO ACKNOWLEDGES HIS FOOLISHNESS

V: 04 How to differentiate the fools

On one occasion, two thieves joined a group of devotees going to the Jetavana monastery, where the Buddha was delivering a discourse. One of them listened attentively to the discourse and soon realised the Dhamma. However, the second thief did not pay any attention to the discourse and he went about stealing from the devotees.

After the discourse, both returned to the house of the second thief who taunted the first thief, 'You are so wise, you have no money to buy anything to cook in your house.' Hearing this remark, the first thief reflected, 'He is so foolish to think that he is wise.' Then, together with some relatives, he went to the Buddha and related the matter to him.