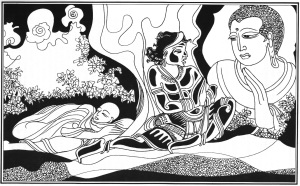 As upon a heap of rubbish thrown on the highway, a sweet-smelling, lovely lotus may grow, even so amongst worthless beings, a disciple of the Fully Enlightened One outshines the blind (ignorant) worldlings in wisdom.1

IV: 12 Giving alms to test the wise (Sirigutta and Garahadinna)

Sirigutta wanted to find out the truth about the Niganthas, whether they really possessed the power of knowing other people's thoughts, etc. So he made a long, deep trench and filled it up with dirt and filth. Seats were then placed precariously over the trench; and empty pots were brought in and covered up with cloth and banana leaves to make them appear as if they were full of rice and curries. When the Niganthas arrived, they were requested to enter one by one, to stand near their respective seats, and to sit down simultaneously. As all of them sat down the flimsy ropes broke and the Niganthas fell into the filthy trench. Then Sirigutta taunted them, 'If you know the past, the present and the future, why don't you know the thoughts of others?' All the Niganthas then fled in terror and embarrassment.

Garahadinna naturally was furious with Sirigutta after this incident and refused to talk to his friend for sometime. Then he decided that he would have his revenge on Sirigutta. He pretended that he was no longer angry, and one day asked Sirigutta to invite the Buddha and his disciples for almsgiving on his behalf. So Sirigutta invited the Buddha to the house of Garahadinna. At the same time, he told the Buddha about what he had done to the Niganthas, the teachers of Garahadinna. He also expressed his fear that this invitation might be a revenge and that the invitation should be accepted only after due consideration.

The Buddha, with his supernormal power, knew that this would be the occasion for the two friends to attain the first stage of Sainthood and therefore accepted the invitation. Garahadinna made a trench, filled it with live coals and covered it with mats. The next day, the Buddha and the bhikkhus went to the house of Garahadinna. When the Buddha stepped on the mat over the trench, the mat and live coals miraculously disappeared. Instead lotus flowers, each as large as a cart wheel, sprang up for the Buddha and his disciples to sit upon.

Seeing this miracle, Garahadinna was very much alarmed and he said to Sirigutta, 'Help me, dear friend. Out of my desire for revenge, I have truly done a great wrong. My bad designs have had no effect at all on your teacher. I have not prepared any food. The pots in my kitchen are all empty. Please help me.' Sirigutta then told Garahadinna to go and look in the pots. When Garahadinna found all the pots filled with food he was astounded and at the same time he was very much relieved and very happy. So, the food was offered to the Buddha and his disciples. After the meal, the Buddha expressed his appreciation (anumodana) of the meritorious act and then said, 'Ignorant worldlings, lacking in knowledge, do not know the unique qualities of the Buddha, the Dhamma and the Sangha and so they are like the blind; but the wise, having knowledge, are like people with sight.'

The Buddha expounded the Dhamma in a gradual manner. While listening attentively to the religious discourse, Garahadinna's body was slowly suffused with joy and happiness. At the end of the discourse, both Garahadinna and Sirigutta attained the first stage of Sainthood.

Both of them renewed their friendship and became strong supporters of the Buddha and his bhikkhus. They also donated most of their wealth to the cause of the Buddha Dhamma.

Back at the Jetavana monastery, the bhikkhus expressed surprise that lotus flowers sprang up from a trench filled with coals. The Buddha replied that it was not the first time, and in response to their request, he related in detail the Khadirangara Jataka.

Nobody is condemned in Buddhism, for greatness is latent even in the seemingly lowliest, just as lotuses spring from muddy ponds.