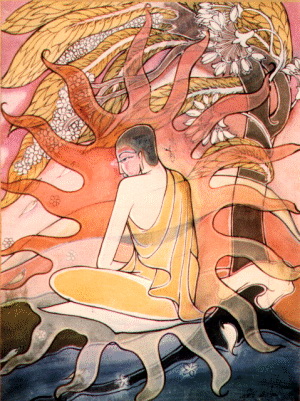 THE SCENT OF VIRTUE IS BY FAR THE BEST

The scents of tagara and of sandalwood are very faint; but the scent (reputation) of the virtuous is the strongest;
it spreads even to the abodes of the devas.

Arising from nirodha samapatti*(temporary suspension of mental activities) Venerable Kassapa, entered into an area where poor people were dwelling in the city of Rajagaha for almsfood. His intention was to give a poor man an opportunity of gaining great merit as a result of offering almsfood to one who had just come out of nirodha samapatti. Sakka, king of the devas wishing to take the opportunity of offering almsfood to Kassapa, assumed the form of a poor old weaver and came to Rajagaha with his wife Sujata. Kassapa stood at their door, the poor old weaver took the bowl from Kassapa and filled up the bowl with rice and curry. The delicious smell of the curry spread everywhere. Then it occurred to Kassapa that this person was not an ordinary human being, and he came to realise that this was Sakka himself. Sakka admitted the fact and claimed that he too was poor because he had had no opportunity of offering anything to anyone during the time of the Buddha. So saying, Sakka and his wife Sujata left Kassapa after paying their respects.

From his monastery, the Buddha saw Sakka and Sujata leaving and told the bhikkhus about Sakka offering almsfood to Kassapa. The bhikkhus wondered how Sakka knew that Kassapa had just come out of nirodha samapatti, and that it was the right and auspicious time for him to make an offering to Kassapa. The question was put up to the Buddha, who answered, 'Bhikkhus, the reputation of a virtuous one like my son Kassapa, spreads far and wide; it reaches even the deva world. On account of his good reputation, Sakka himself has come to pay his respects.'

*Nirodha samapatti : A Saint who has eradicated mental impurities can, by will power, temporarily arrest the ordinary flow of consciousness even for seven days. When one attains to this state all mental activities cease although there exist heat and life, devoid of any breathing. At this state, a Saint is immune from danger. Nirodha means cessation, and samapatti is attainment. This is the period during which the Buddhas, Paccekabuddhas and Arahants experience Nibbanic bliss while living in this world.