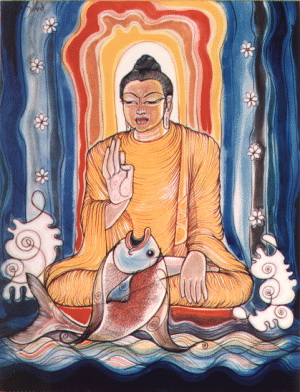 The mind is difficult to control; swiftly and lightly, it moves and lands wherever it pleases. It is good to tame the mind, for a well-tamed mind brings happiness.

Once, sixty bhikkhus, after each obtaining a subject of meditation from the Buddha, went to a village at the foot of a mountain. There, Matika Mata, mother of the village headman, offered them almsfood; she also built a shelter for them, so that they could stay in the village during the rainy season. One day, she requested the bhikkhus to teach her meditation. They taught her how to meditate on the thirty-two constituents of the body leading to the awareness of the decay and dissolution of the body. Matika Mata practised with diligence and attained the third stage of Sainthood together with extraordinary knowledge and mental powers, even before the bhikkhus did.

With the Divine Power of Sight (Dibbacakkhu) she saw that the bhikkhus had not attained Insight. She also learned that these bhikkhus had enough potential for the attainment of Arahanthood but that they needed proper food because a weak body will not allow the mind to function at its best. So, she prepared nutritious food for them. With nutritious food and right effort, the bhikkhus developed right concentration and eventually attained Arahanthood.

At the end of the rainy season, the bhikkhus returned to the Jetavana monastery, where the Buddha was in residence. They reported to the Buddha that all of them were in good health and in comfortable circumstances and that they did not have to worry about food. They also mentioned Matika Mata who had been aware of their thoughts and had offered them the very good food that was necessary to keep them in good health which is important for proper concentration.

A certain bhikkhu, hearing them talking about Matika Mata, decided that he too would go to the village. So, taking a subject of meditation from the Buddha he arrived at the village monastery. There, he found that everything he wished for was sent to him by Matika Mata. When he wishes for some food she personally came to the monastery, bringing along choice food with her. After taking the food, he asked her if she really could read the thoughts of others, but she evaded his question and replied, 'People who can read thoughts of others behave in such and such a way.' Then, the bhikkhu thought, 'If I, like an ordinary worldling, should entertain any impure thoughts, and if she can really read thoughts, she is sure to think ill of me.' He, therefore became afraid of the lay devotee and decided to return to the Jetavana monastery. He told the Buddha that he could not stay in Matika's village because he was afraid that the lay devotee might detect impure thoughts in him. The Buddha then advised him to observe just one thing, that is, to control his mind. He also advised him to return to the village and not to think of anything else but the object of his meditation. The bhikkhu returned and Matika Mata offered him nutritious food as she had done to the others before, so that he might be able to practise meditation without worry. Within a short time, he too purified his mind and attained Arahanthood.