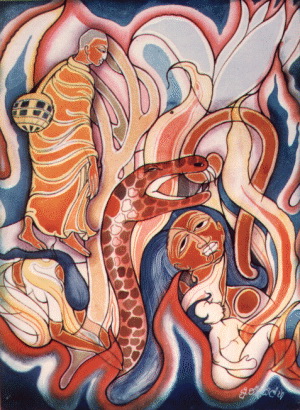 Bhikkhu who delights in heedfulness, and looks with fear on heedlessness, advances like fire, burning all fetters great and small.

II:08 The fire of knowledge

A certain bhikkhu after obtaining a subject of meditation from the Buddha went to the forest to meditate. Although he tried hard he made very little progress in his meditation practice. As a result, he became very depressed and frustrated. So with the thought of getting further specific instructions from the Buddha, he set out for the Jetavana monastery. On his way, he came across a big, blazing fire. He went up to the top of a mountain and observed the fire from there. As the fire spread, it suddenly occurred to him that just as the fire burnt up everything, so also the development of Insight can burn up all fetters of life big and small.

Meanwhile, the Buddha was aware of what the bhikkhu was thinking. So, he transmitted his radiance and appeared to the bhikkhu and spoke to him. 'My son,' he said, 'You are on the right line of thought; keep it up. Even as fire consumes all obstacles, both great and small, a bhikkhu, who delights in heedfulness and who views heedlessness with fear, consumes all fetters,* both great and small.'

Reflecting mindfully on the admonition given, the bhikkhu later attained Arahanthood

A fully ordained disciple of the Buddha is called a Bhikkhu. 'Mendicant monk' may be suggested as the closest equivalent for 'Bhikkhu'. He is not a priest as he is no mediator between God and man. He has no vows for life, but he is bound by his rules which he takes of his own accord. He leads a life of voluntary poverty and celibacy. If he is unable to live the Holy Life, he can discard the robe at any time.

The 'further-shore' fetters, which form the remaining five are eradicated on attaining the fourth and final stage of Sainthood (Arahant).