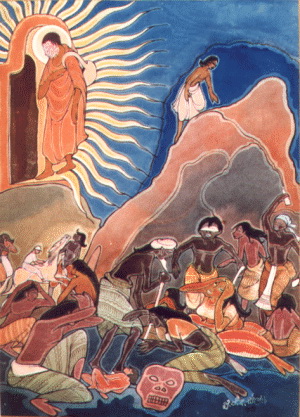 THE STRENUOUS AND THE ALERT OVERTAKE THE THOUGHTLESS AND THE INDOLENT

II:06 The goal of the religious life

Two bhikkhus, after obtaining a subject of meditation from the Buddha went to a monastery in the forest. One of them, being negligent, spent his time warming himself by the fire and talking to young novices throughout the first watch of the night and generally idling away his time. The other faithfully performed the duties of a bhikkhu. He walked in meditation during the first watch, rested during the second watch and again meditated during the last watch of the night. Thus, being diligent and ever mindful, the second bhikkhu attained Arahanthood within a short time.

At the end of the rainy season (vassa) both of them went to pay homage to the Buddha, and he asked them how they had spent their time during the vassa. The lazy and negligent bhikkhu answered that the other bhikkhu had been idling away his time just lying down and sleeping. The Buddha then asked the lazy bhikkhu, 'But, what about you?' He replied that he generally sat warming himself by the fire during the first watch* of the night and then sat up without sleeping. But the Buddha knew quite well how the two bhikkhus had spent their time. So he said to the idle one: 'Though you are lazy and negligent yet you claim to be diligent and ever mindful; but you have made the other bhikkhu appear to be lazy and negligent even though he is diligent and ever mindful. You are like a weak and slow horse compared to my son who is like a strong, fleet-footed horse.