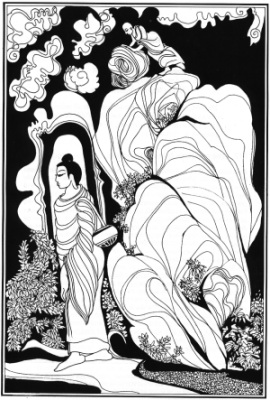 LEARNING WITHOUT PRACTICE IS OF NO WORTH

I:14 Knowledge is not realisation

Once there were two bhikkhus of noble family who were good friends. One of them had learned the Tipitaka* and was very proficient in reciting and preaching the sacred doctrine. He taught many other bhikkhus and became the instructor of eighteen groups of bhikkhus. The other bhikkhu after striving diligently and ardently, attained Arahanthood together with extraordinary knowledge in the course of Insight Meditation.

On one occasion, when the second bhikkhu came to pay homage to the Buddha at the Jetavana monastery, the two bhikkhus met. Not realising that his friend had already become an Arahant, the Master of the Tipitaka looked down on him, thinking that the old bhikkhu knew very little of the sacred Dhamma. So he decided to ask him some questions on the Dhamma. The Buddha knew about his unkind intention and he also knew that as a result of seeking to ridicule a noble disciple the learned bhikkhu would have to suffer.

So, out of compassion, the Buddha visited the two bhikkhus to prevent the learned bhikkhu from ridiculing his friend. The Buddha himself did the questioning. He put questions on jhanas and maggas (higher achievement through meditation) to the master of the Tipitaka who could not answer them because he had not practised what he had taught. The other bhikkhu, having practised the Dhamma and having attained Arahanthood, could answer all the questions. The Buddha praised the one who had practised and realised the Dhamma but not a single word of praise was spoken for the learned scholar.

The resident disciples could not understand why the Buddha had words of praise for the old bhikkhu and not for their learned teacher. The Buddha explained the matter to them saying that the learned bhikkhu who knows a great deal but does not live in accordance with the Dhamma is like a cowherd, who looks after the cows for wages, while the one who practises Dhamma is like the owner who enjoys the five kinds of produce of the cows. Thus, the scholar enjoys only the services rendered to him by his pupils but not the benefit of Sainthood. The other bhikkhu, though he knows little and recites only a little of the Dhamma, having clearly comprehended the essence of it and having practised it diligently, has eradicated craving, ill-will and ignorance. His mind being totally freed from mental defilements and from all attachments of this world as well as to the next he truly reaps the benefits of Sainthood or Perfection.

* An act of proclamation carried out by the Order of the Sangha regarding a member declaring that since his conduct was of one kind before and is of another kind now, henceforth all his physical and verbal actions are only his and have nothing to do with the Buddha, the Dhamma and the Sangha.

* Tipitaka: The Teachings of the Buddha are collectively termed the Tipitaka. It consists of three sections
(i) Vinaya Pitaka: Discipline mainly dealing with rules and regulations for the discipline of the Holy Order,
(ii) Sutta Pitaka: Discourses mainly on conventional Truth uttered by the Buddha on various occasions and
(iii) Abhidhamma Pitaka: Ultimate Truth containing the profound moral psychology of the Buddha's Teaching.