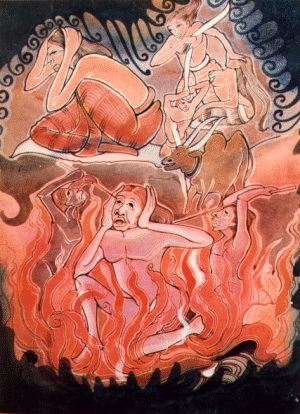 THE EVIL-DOER LAMENTS HERE AND HEREAFTER

I:12 The miserable fate of Devadatta

Devadatta, the Buddha's cousin, was at one time residing with the Enlightened One in Kosambi. While staying there he realised that the Buddha was receiving much respect and honour as well as offerings. He envied the Blessed One and aspired to head the Order of the bhikkhus. One day, while the Buddha was preaching at the Veluvana monastery in Rajagaha, he approached the Enlightened One with a selfish idea. He suggested that the Order be entrusted to his care, on the grounds that the Buddha was getting old. The Buddha did not accept his suggestion and admonished him, saying that he was not worthy of holding such responsibility. So, the Buddha asked the Sangha to carry out an act of proclamation of penalty* on Devadatta for his arrogance in thinking that he was worthy to take the Buddha's place.

Devadatta felt aggrieved and vowed to take revenge. He attempted to kill the Buddha on three occasions: first, by employing some archers; secondly, by climbing up the Gijjhakuta Hill and rolling down a big piece of rock on to the Buddha; and thirdly, by causing the elephant Nalagiri to attack the Buddha. The hired assassins instead of attacking the Buddha became his disciples. The big piece of rock only hurt the Buddha's toe. When the elephant rushed at the Buddha, it was made docile by the Buddha's compassion. Thus, when Devadatta failed to kill the Buddha, he tried another tactic. He tried to break up the Order of the bhikkhus by taking away some newly admitted bhikkhus with him to Gayasisa. However, most of them were convinced by Venerable Sariputta and Venerable Moggallana to return voluntarily to lead the Holy Life under the guidance of the Buddha.

Later, Devadatta fell ill. He had been ill for nine months. One day he asked his pupils to take him to the Buddha at the Jetavana monastery to ask forgiveness for the evil deeds he had committed.

When Devadatta and his party reached the pond in the Jetavana monastery compound, Devadatta said he was thirsty. So, the carriers put down the couch by the bank of the pond and went to take some water. Devadatta also rose from his couch and placed both his feet on the ground. Immediately, his feet sank into the earth and he faced a miserable death. Devadatta did not have the opportunity to see the Buddha because of the evil deeds done against the Enlightened One. After his death, he was reborn in a very miserable and suffering state where he has to pay for all the evil deeds that he had committed

* An act of proclamation carried out by the Order of the Sangha regarding a member declaring that since his conduct was of one kind before and is of another kind now, henceforth all his physical and verbal actions are only his and have nothing to do with the Buddha, the Dhamma and the Sangha.

** After paying for his evil deeds over an incredibly long period of time, Devadatta will one day become a Paccekabuddha due to his earlier attainment of certain spiritual development. In samsara (cycle of birth and death), neither hell nor heavenly worlds are permanent or everlasting. Nibbana is the only permanent state.